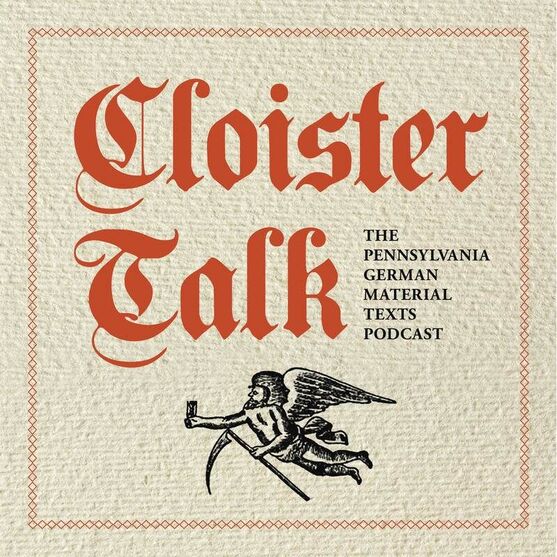 Following up on key themes in The Word in the Wilderness, this new podcast welcomes you into the world of manuscript production, popular piety, and spiritual culture in early German Pennsylvania and beyond.

Episode 1: The History of Studying Pennsylvania Germans and Their Illuminated Manuscripts 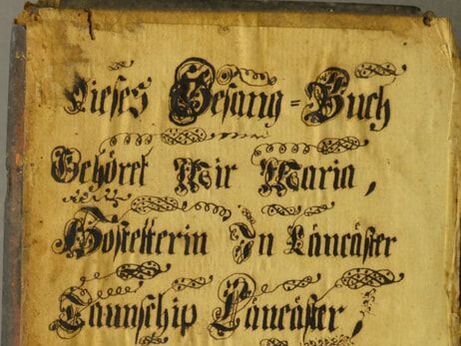 Episode 2: What is "Fraktur"? Type, Script, and Art 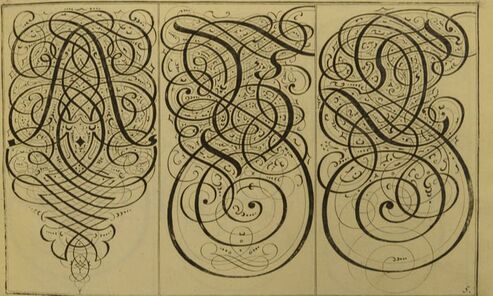 Michael Baurenfeind, Volkommene Wieder-Herstellung, der bischer Fehr in Verfall gekommenen gründlich-u: Zierlichen Schreib-Kunst… (Nuremberg: s.n., 1716), Z43 B35 F. Courtesy of The Winterthur Library, Winterthur, DE.
This episode explores the many meanings of the word "Fraktur" in its European and American contexts and considers how best to deploy the term when discussing the manuscript art of the Pennsylvania Germans.

Episode 3: Who Were the Pennsylvania Germans, and Why do They Matter? 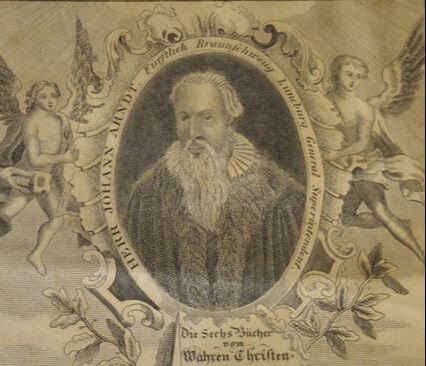 Episode 4: What is "Manuscript Culture"? Reframing Pennsylvania German Manuscript Studies as a Sub-field of Book History 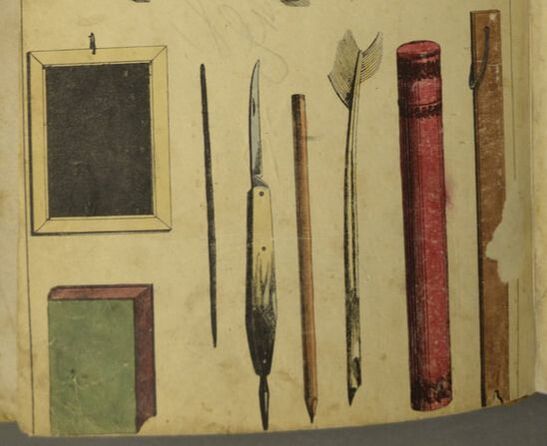 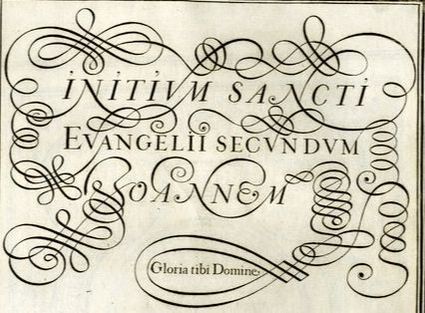 Episode 6: "The Root of Wisdom is to Fear the Lord": Wisdom Literature and Pennsylvania German
​Manuscript Culture 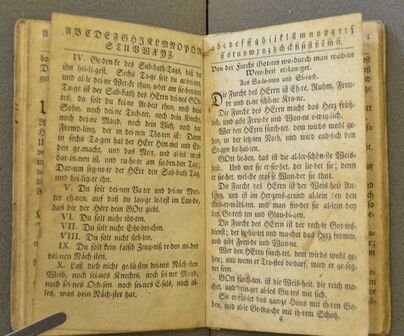 Episode 7: "Eines Christen Reise": Origins of The Word in the Wilderness 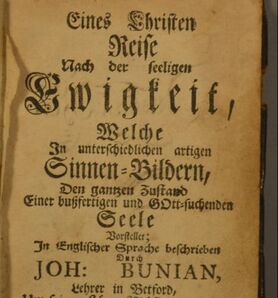 Joh. Bunian (John Bunyan), Eines Christen Reise nach der seeligen Ewigkeit… (Ephrata, PA: Drucks und Verlags der Brüderschafft, 1754). EL2 .B942p. GE 754. Courtesy The Rosenbach, Philadelphia.
In this final episode of the first season of Cloister Talk, learn about the research and writing process that led to the publication of The Word in the Wilderness: Popular Piety and the Manuscript Arts in Early Pennsylvania. 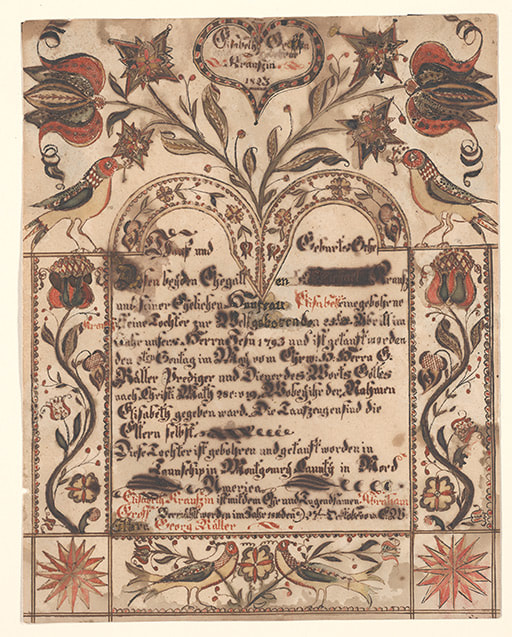 Birth, baptismal, and marriage certificate (Geburts, Tauf, und Trauschein) for Elisabeth Groffin Kraussin [Elisabeth Krauss]. Watercolor and ink on wove paper. Montgomery County, Pennsylvania, 1823. FLP 1213. Courtesy of the Free Library of Philadelphia Rare Book Department.
​Season Two of Cloister Talk: The Pennsylvania German Material Texts Podcast debuts on Monday, January 4, 2021.  In this trailer, learn about what questions and topics will be explored in the upcoming season, and about what primary sources you can expect to learn in the new episodes.

Episode 8: The Pirate Bible: An Epic Tale of Looted Germantown Bibles, and What It Reveals About Pennsylvania German Religion in a Vast Atlantic World 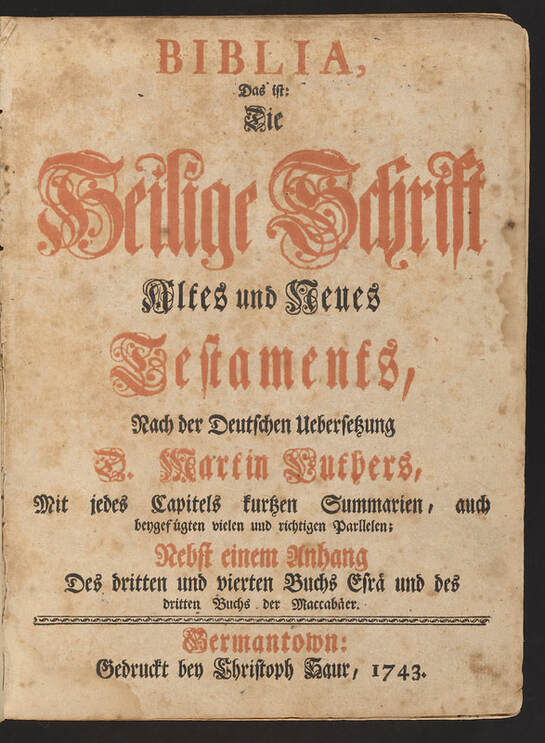 Biblia, Das Ist: Die Heilige Schrift Altes und Neues Testaments … Germantown, PA: Christopher Saur, 1743. FLP Call No. Pennsylvania German Collection – Germantown 1743. Free Library of Philadelphia Rare Book Department.
Pennsylvania German religious culture existed within a vast, complex, fluid, and interconnected world of German-Protestant spirituality and text exchange.  Perhaps no artifact better exemplifies this heritage than a Pennsylvania-printed Bible held at the Free Library of Philadelphia that was once captured by pirates on its voyage to Europe!  Listen to this remarkable story—and learn what it has to teach us about early American religion and history of the book. 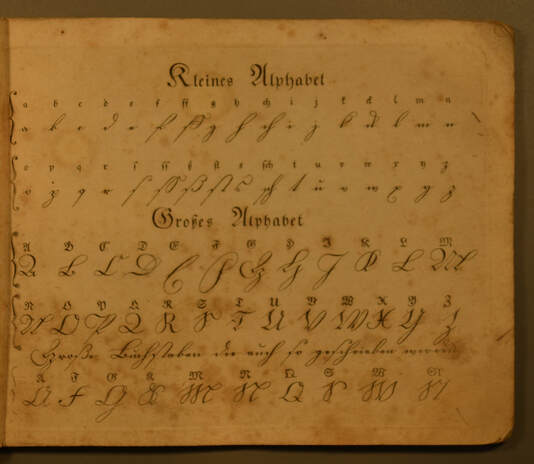 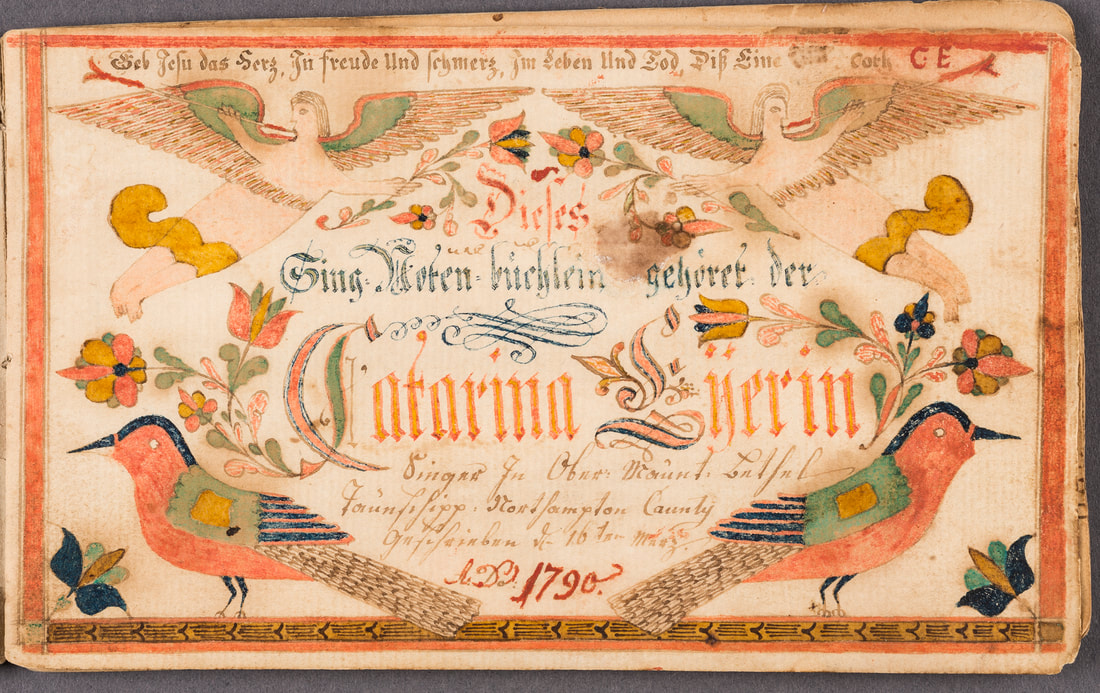 Johann Adam Eyer, songbook, 1790. Mount Bethel Township, Northampton County, Pennsylvania. 2012.0027.015. Museum purchase with funds provided by the Henry Francis du Pont Collectors Circle. Courtesy of Winterthur Museum.
​Music has always figured prominently in Pennsylvania German religious culture, making it unsurprising that the musical and calligraphic arts intersected in potent ways during the Long Era of Manuscripts.  In this episode of Cloister Talk, take a journey into the rich musical heritage of German Protestantism and its expressions in southeastern Pennsylvania. 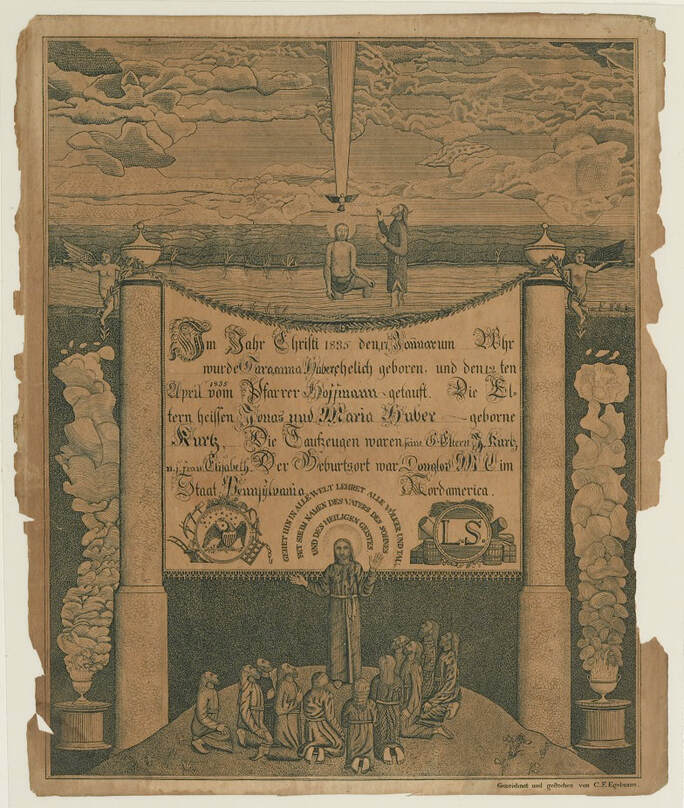 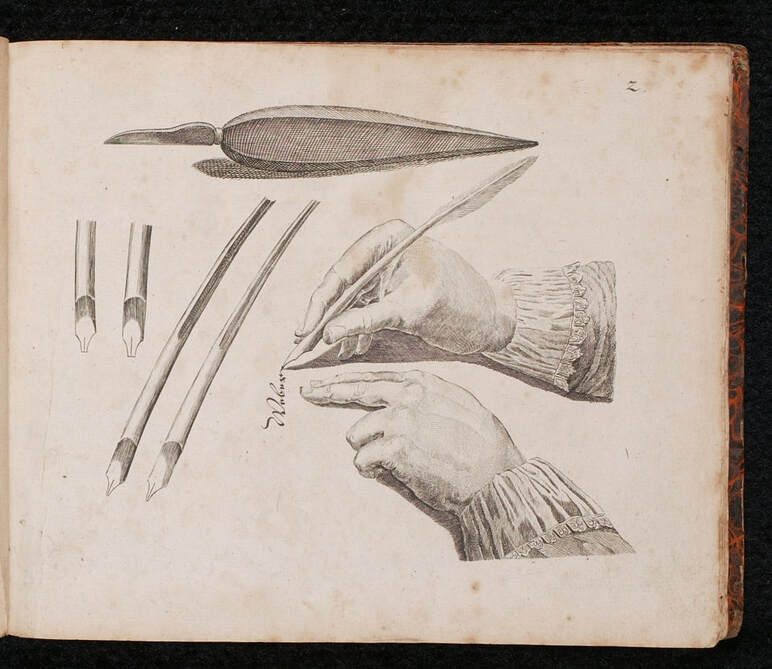 Episode 13: A Lesson in Early Modern Linguistic Theory with Johann Merken, and Its Implications for the Study of Material Texts 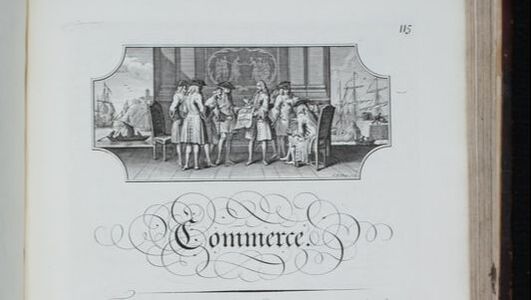 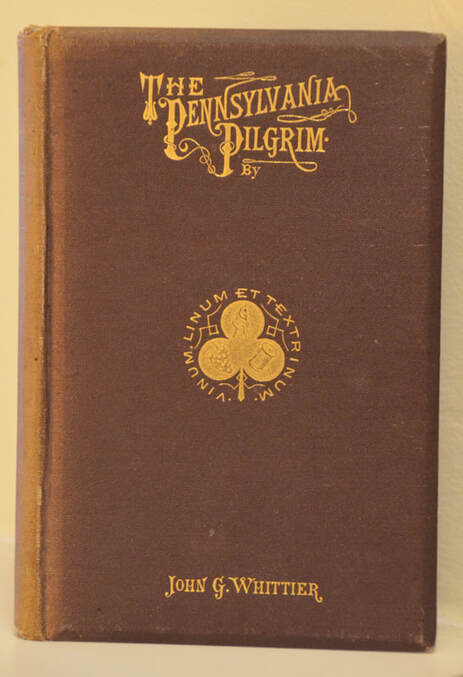 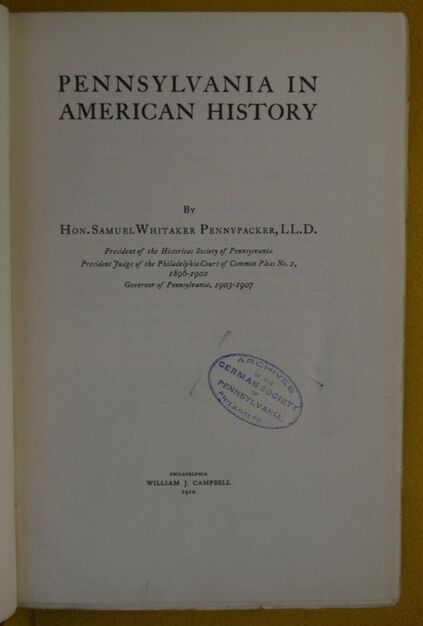 Samuel Whitaker Pennypacker, Pennsylvania in American History (Philadelphia: William J. Campbell, 1910). Courtesy of the German Society of Pennsylvania Library. Photograph by the podcaster.
A key topic addressed in The Word in the Wilderness: Popular Piety and the Manuscript Arts in Early Pennsylvania is how a deeper understanding of the spiritual underpinnings of the Pennsylvania German manuscript arts can add nuance to our interpretation of early American religious and cultural life.  This episode of Cloister Talk explores that issue in greater depth, using Samuel Pennypacker’s book Pennsylvania in American History and intellectual historian Perry Miller’s famous work Errand Into the Wilderness as case studies for our analysis.

Episode 16: Afternoon Tea with Alexander Lawrence Ames: Answering Your Questions about Writing The Word in the Wilderness, and a Life Spent in Libraries and Museums 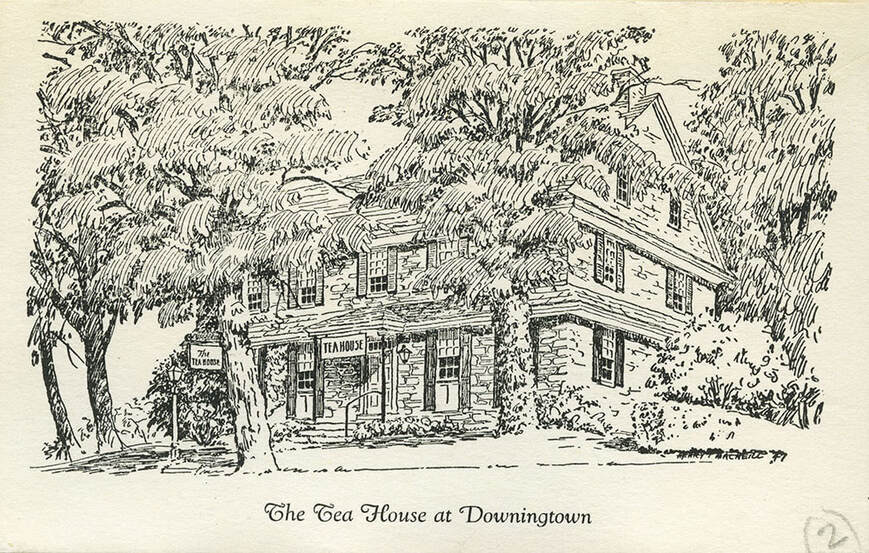 Henry T. MacNeill, postcard, “The Tea House at Downingtown,” A917.481 P536 v.11, Free Library of Philadelphia Rare Book Department.
Writing The Word in the Wilderness: Popular Piety and the Manuscript Arts in Early Pennsylvania, ​especially sharing the book’s ideas with audiences from across Pennsylvania and around the world, has truly been a journey undertaken in community.  At the conclusion of Season 2 of Cloister Talk: The Pennsylvania German Material Texts Podcast, it’s time to sit back, relax, and reflect on the book, the primary sources that made its analysis possible, and what The Word in the Wilderness and Pennsylvania German illuminated manuscripts have to teach us today.  Make a hot cup of tea and settle in for a fascinating discussion!  This final installment of Season 2 features personal reflections on the process of writing the book, and the fascinating world of historical museums and special collections libraries. 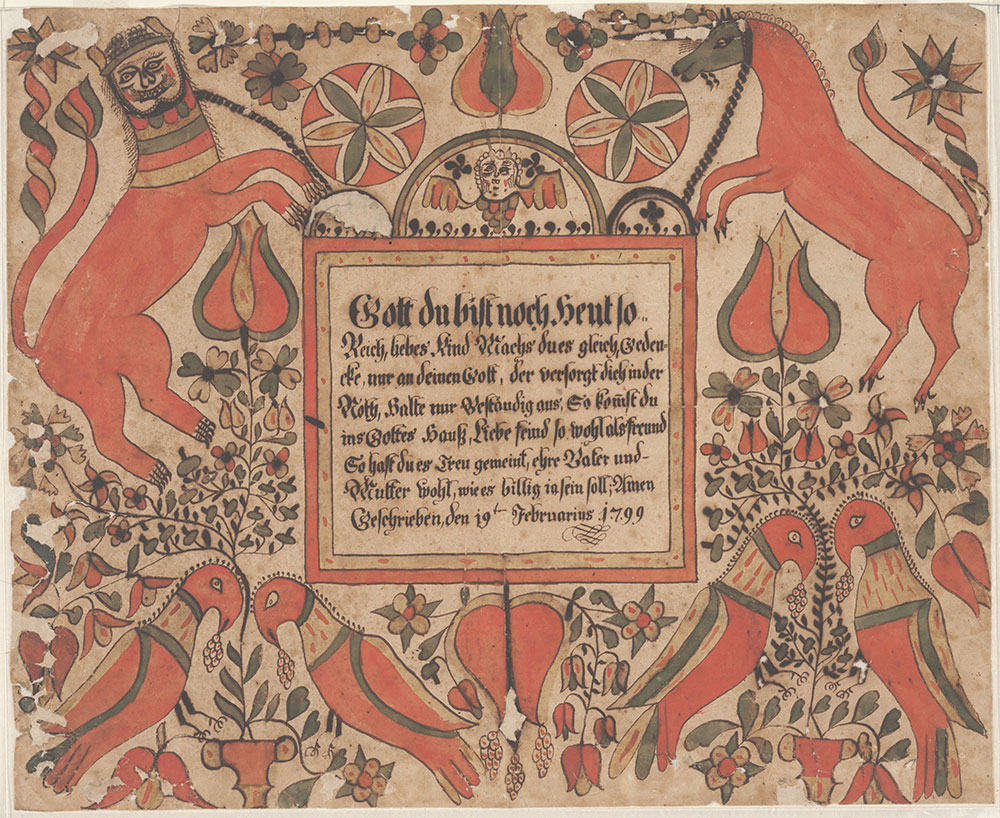 Episode 17: Cloister Talk Live! The Faith That Binds: A Conversation on Anabaptist Bookbindings with Chela Metzger and Erin Hammeke 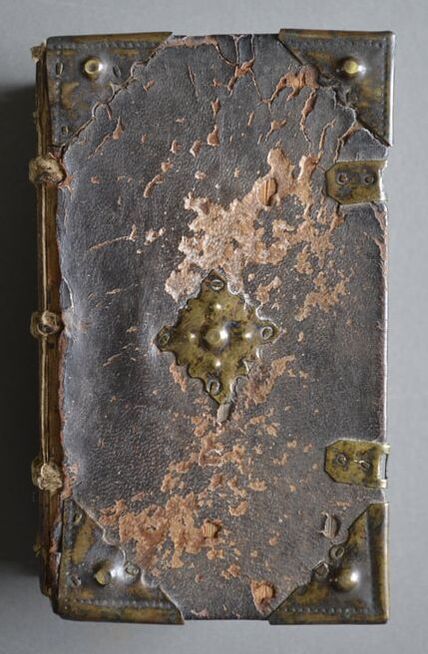 Upper cover of Ausß Bundt/ Das ist: Ettliche schöne Christenliche Lieder, undated. Inscribed by Hans Herr, Lancaster Mennonite Historical Society, Lancaster, Pennsylvania. Photograph by the podcaster. Volume dimensions: 18 x 11 x 9 cm.
​How can material artifacts be wielded as tools for unlocking the lived experiences of past spiritual-devotional cultures?  In this inaugural episode of Cloister Talk Live!, join book conservators Chela Metzger (University of California Los Angeles Library) and Erin Hammeke (Duke University Library) for a conversation about Swiss-Anabaptist bookbindings in early Pennsylvania—and what the books reveal about past personal and social relationships with God.  The interviewees also discuss the state of book history as an interdisciplinary enterprise and offer advice for what it might take to bring historians, material culture scholars, and conservators together, to make optimal use of interdisciplinary expertise in analyzing and interpreting material texts. 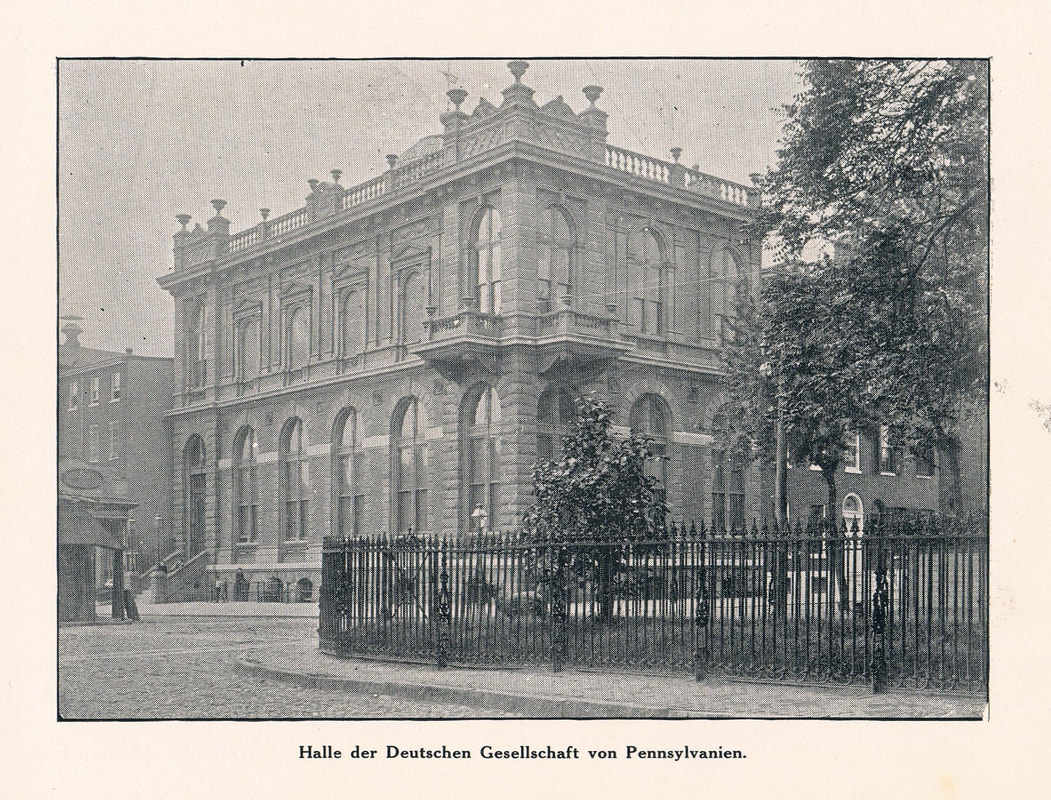 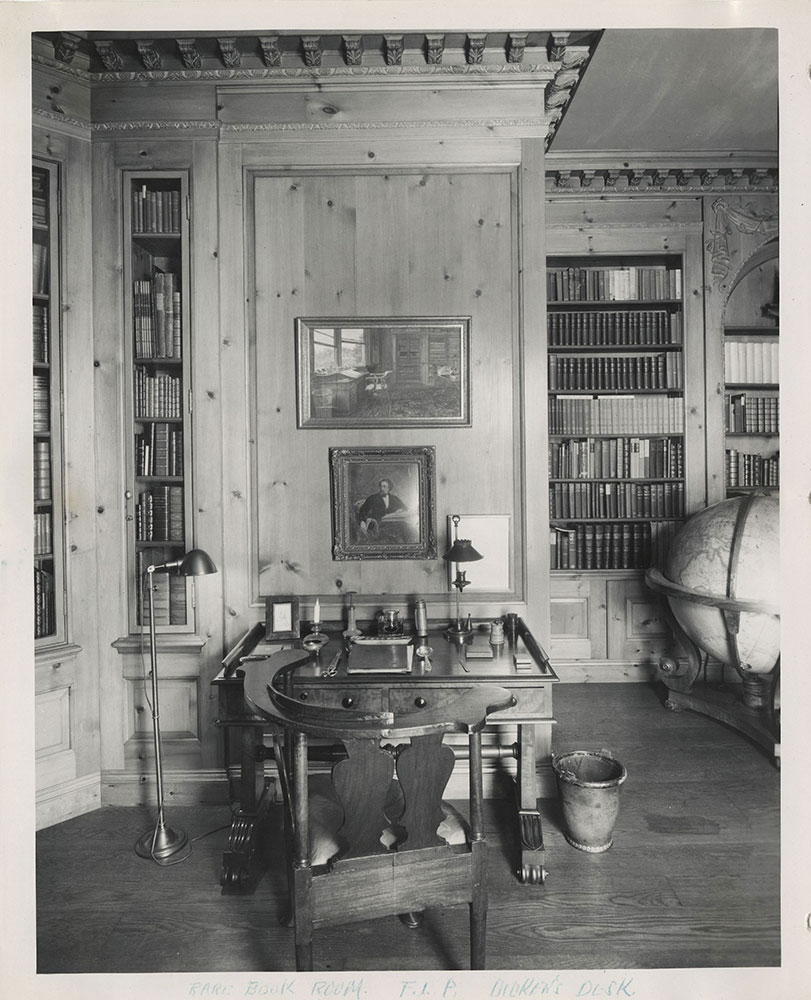 A view of the Elkins Room and Charles Dickens Desk at the Parkway Central Library, Free Library of Philadelphia, ca. 1947. RBD Archives, Free Library of Philadelphia.
​The Parkway Central Library of the Free Library of Philadelphia is a majestic urban monument to literacy, learning, and robust civic discourse.  What is more, the Rare Book Department at the Free Library ranks as one of the nation’s most important repositories of rare books, manuscripts, and other treasures of the history of human civilization.  Its vast Pennsylvania German collection supported the interpretive work undertaken in The Word in the Wilderness.  In this Cloister Talk Live! episode, librarians Janine Pollock and Caitlin Goodman welcome us into the world of the Rare Book Department and reflect on the significance of stewarding special collections in a public library environment.

Episode 20: Cloister Talk Live! At The Rosenbach: The Other Pennsylvania Germans? A Discussion of Early Southeastern Pennsylvania’s Jewish Community with Judith M. Guston 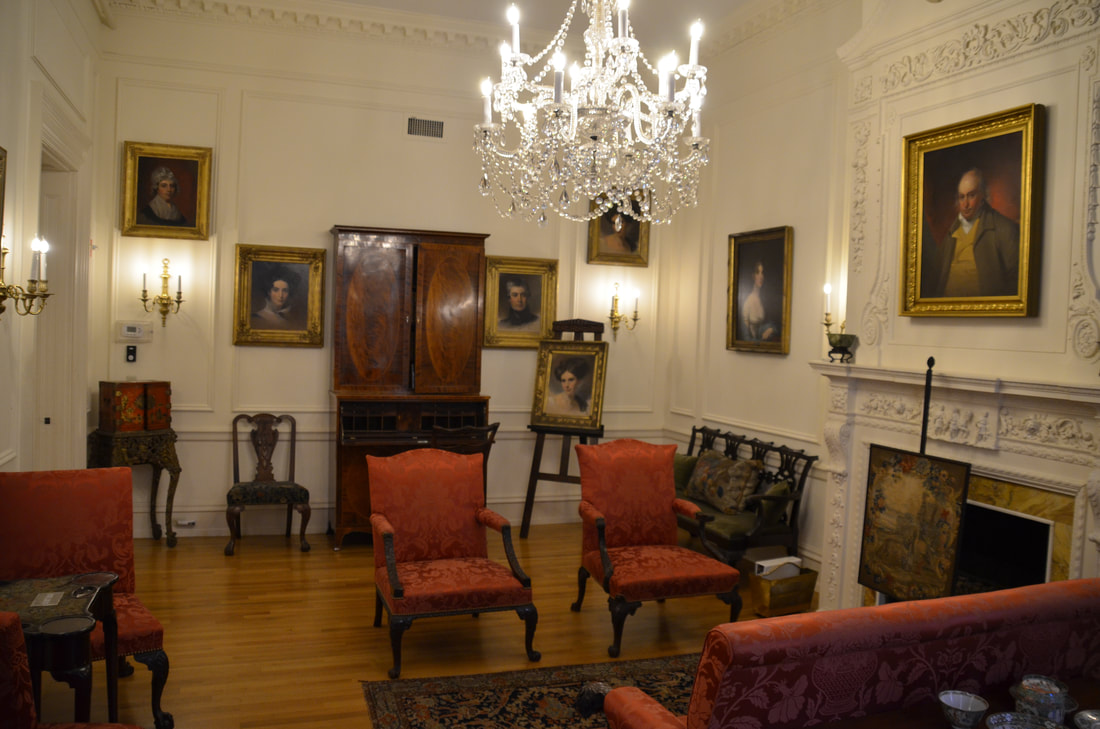 A view of the parlor at The Rosenbach, where many portraits of members of the Gratz family painted by Gilbert Stuart and Thomas Sully are displayed alongside a Gratz family desk and bookcase. Photograph by the podcaster.
​The multicultural life of early Pennsylvania included a vibrant Jewish community.  Judith M. Guston, Curator & Director of Collections at The Rosenbach, discusses early Jewish settlement of the colony and the remarkable Gratz family holdings at The Rosenbach today, which document that early heritage.  Ms. Guston also comments on the theoretical and methodological challenges of adopting a material culture approach to the study of past religious and spiritual life, and the meaning of early Pennsylvania’s religious plurality for American society today. 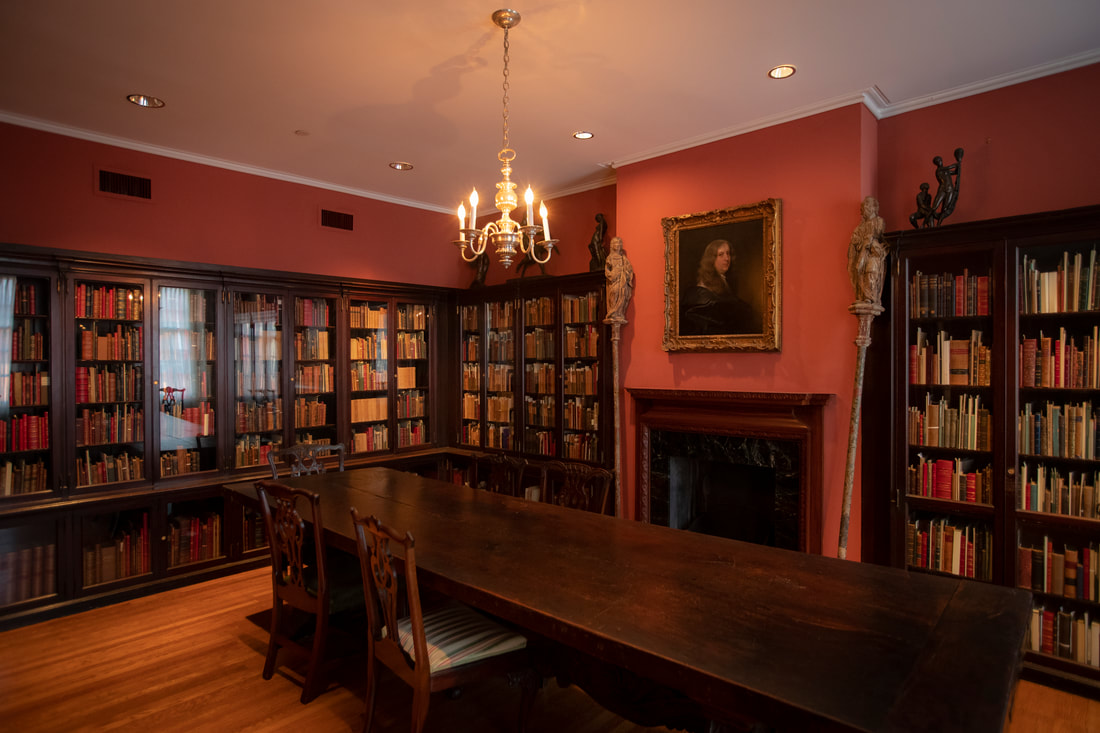 Episode 22: Cloister Talk Live! Books Along the Brandywine: A Conversation with Emily Guthrie, Formerly of The Winterthur Library 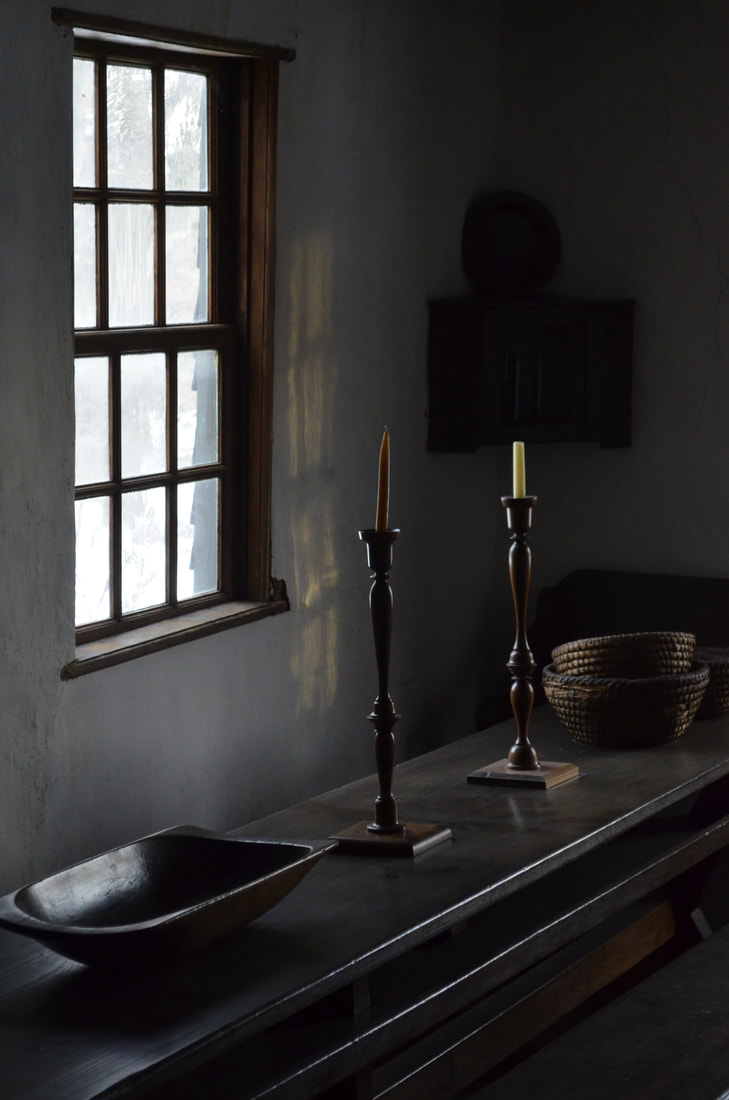 A scene from Historic Ephrata Cloister, 2016. Photograph by the podcaster.
​Few landmarks of early Pennsylvania heritage inspire awe and capture the imagination quite like Historic Ephrata Cloister in Lancaster County—a place of architectural beauty, spiritual devotion, mystical exploration, musical accomplishment, and tremendous historical significance to early-American book production and the manuscript arts.  Ephrata Curator Kerry Mohn and Museum Educator Michael Showalter guide us through the history and significance of Ephrata and help us place the site within the wider context of early American religion and material culture. 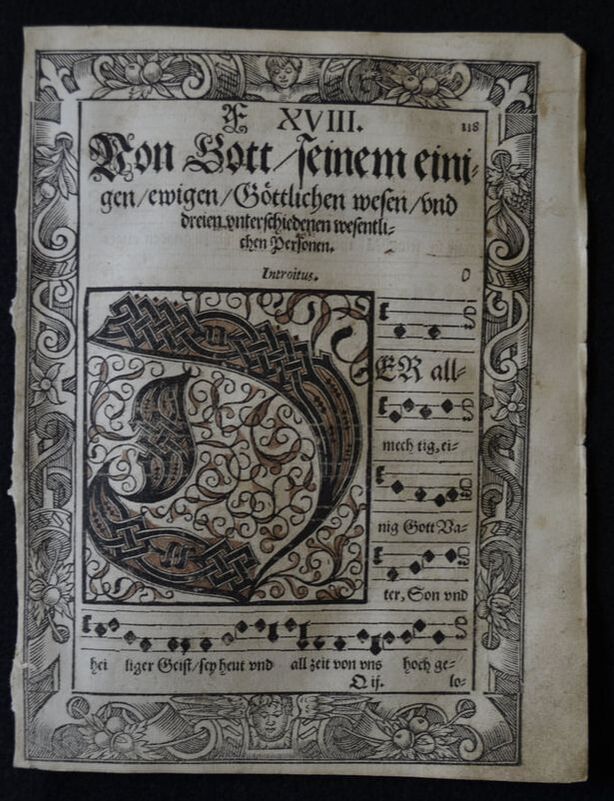 Das erste Teil der geistlichen Gesenge /von den wercken Jhesu Christi: und erstlich Von seiner gnad-reichen zukunfft und heiligen Menschwerdung. 1566. This volume has a Schwenkfelder provenance, having been inscribed by Maria Hübner in 1794. VR12-8 / L2004.0999.311. Courtesy of the Schwenkfelder Library & Heritage Center, Pennsburg, Pennsylvania.
​Mysticism is a central (if complex, debated, and often misconstrued) part of the religious DNA of early German Pennsylvania.  The theology and devotional practice of the Schwenkfelders—a German-speaking sectarian group present in the colony—connected to early modern European mystical tradition in important ways, and the religious community practiced a rich manuscript tradition.  This episode of Cloister Talk Live! takes us to the Schwenkfelder Library & Heritage Center to dive into the Library’s astounding rare book, manuscript, and decorative-art collections.  Curators and scholars Candace Perry and Allen Viehmeyer introduce us to the institution’s holdings, consider how they relate to the material culture of other Pennsylvania German groups, summarize the state of Schwenkfelder studies today, and suggest new directions for the field. 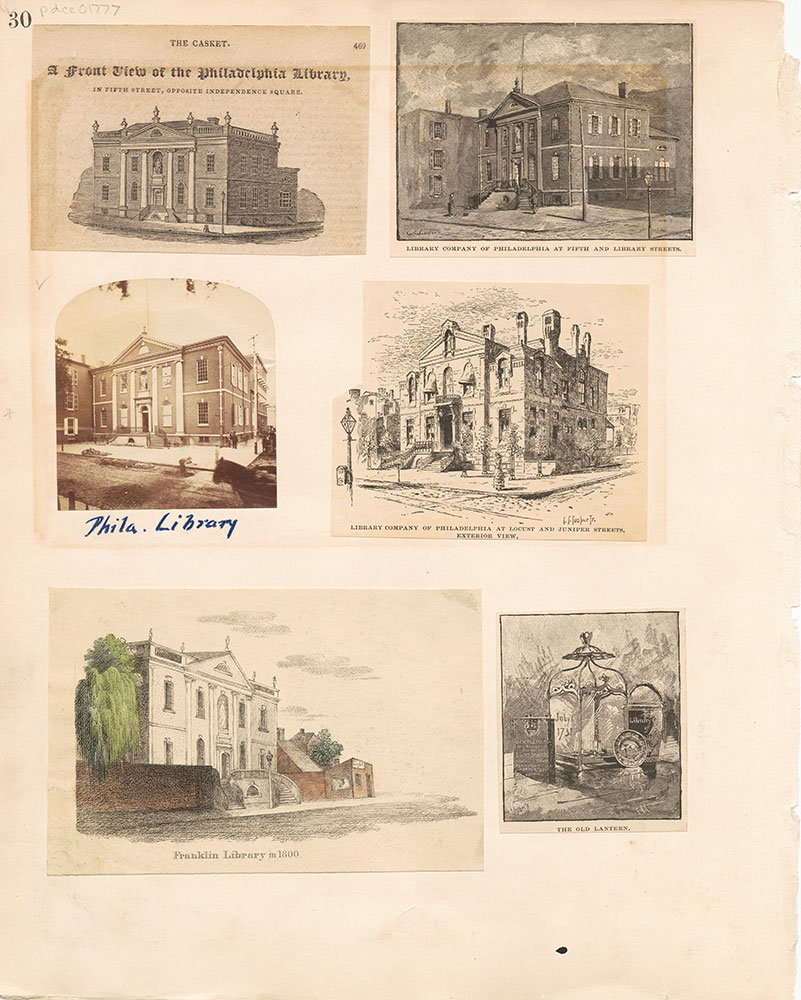 Samuel Castner, Jr. (1843-1929), compiler. Views of the various buildings of the Library Company of Philadelphia (“Franklin Library in 1800, and five others”), Castner Scrapbook v.17, Education 1, page 30, A917.481 P536 v.17. Free Library of Philadelphia Rare Book Department.
​Founded by Benjamin Franklin, the Library Company of Philadelphia is the thriving epicenter of early American book history, and the inspiration of librarianship in America. James N. Green, Librarian Emeritus of the Library Company and a scholar of early American book history, introduces us to the history of the Library Company, the contours of its Pennsylvania German collections, and possible futures for the fields of material texts, Pennsylvania German studies, and cultural heritage preservation broadly conceived.  Sharing personal memories of his long and distinguished career in librarianship and the history of material texts, Green also reflects on the unique library ecosystem that defines the Philadelphia region, the foundation of the Philadelphia Area Consortium of Special Collections Libraries (PACSCL), and the evolving civic role of libraries.

Episode 26: A Second Cup of Afternoon Tea with Alexander Lawrence Ames: Answering Questions about The Word in the Wilderness, and Some Closing Reflections on the Book 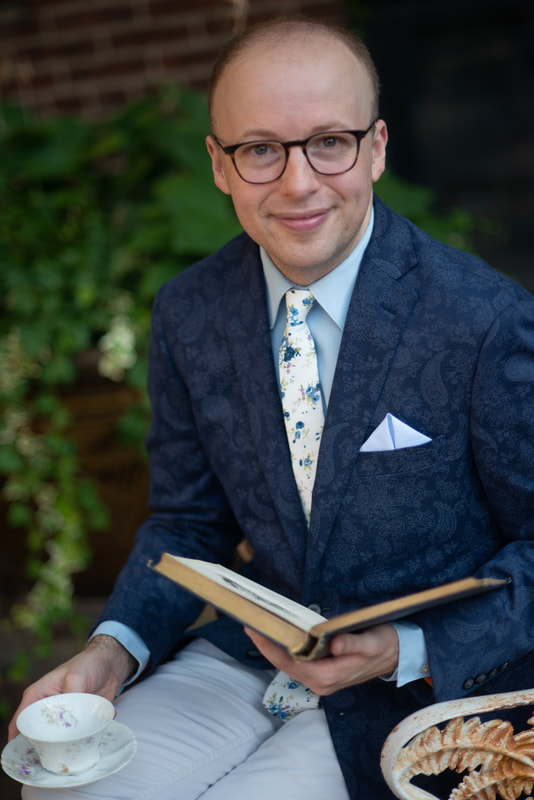 Portrait of Alexander Lawrence Ames. Photo by Kyle Cassidy.
​At the close of Season 3 of Cloister Talk, sit back and relax with a hot cup of tea to reflect on Pennsylvania German manuscript culture and popular piety in early America, and future directions for the study of early American cultural and intellectual history.  Reader and listener-submitted questions considered in this episode include the implications of The Word in the Wilderness for our understanding of the changing place of cursive handwriting instruction in American schools today, shifting approaches to the scholarly study of Pennsylvania German calligraphy and manuscript illumination advocated in The Word in the Wilderness, and possible reasons for the long decline of traditional illuminated manuscript culture in German Pennsylvania.  The episode closes with some personal reflections on next steps forward for the field of Pennsylvania German material texts within the context of closely-aligned scholarly disciplines.  Make a hot cup of tea, get cozy, and settle in for an enjoyable conversation as the paperback version of The Word in the Wilderness makes its debut!